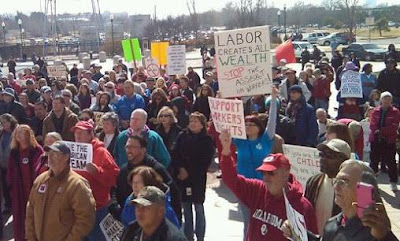 
Each year on Dec. 10, the global community marks International Human Rights Day, anchored in one of the founding documents of the United Nations, which asserts that each one of us, everywhere, at all times is entitled to the full range of human rights.

That founding document, the Universal Declaration of Human Rights, also lists “the right to form and to join trade unions” as a basic tenet of human freedom. For many workers around the world, the right to form unions is essential for ensuring the safe working conditions and living wages that are fundamental to human rights.

In addition to being a world figure and diplomat, Eleanor Roosevelt was a union member. As a newspaper columnist, she joined The Newspaper Guild, AFL-CIO. She remained a member for over 25 years. She was a keynote speaker when the AFL-CIO merged into a united organization.

Biographers of Mrs. Roosevelt have noted that her commitment to labor unions stayed with her to the end. Her union card was in her wallet when she died.

On our UNA-OKC website, we observe: "In many ways, the UN and the labor movement are each a product of the same social and historical experiences. In some respects, they grew up together."

It is natural, therefore, that we should honor two labor leaders from our state who exemplify the support that the labor movement has given to the promotion of human rights over many decades.

Jimmy Curry is the president of the Oklahoma AFL-CIO. A graduate of Spartan School of Aeronautics, he worked for nearly 20 years in our state's aeronautics industry before going to work for the AFL-CIO in 1997. In addition to his work for the union, Mr. Curry gives generously to the community. For example, he serves on the board for the United Way of Central Oklahoma. He has served on the advisory board for the Oklahoma Institute for Child Advocacy. He is a winner of the Meritorious Service Award from the Professional Fire Fighters of Oklahoma.

Last year, the Federation filed a petition in Oklahoma City to let voters decide if the minimum wage should be raised from $7.25 to $10.10 an hour. Before a vote could be taken, though, Gov. Mary Fallin signed a bill prohibiting cities across the state from establishing local laws on the topic of wages and employee benefits.

The Federation is focused on public policy issues such as raising the minimum wage, immigration reform, the expansion of Medicaid in Oklahoma, and other issues of social justice that affect working families. They often partner with faith-based and community organizations to pursue these objectives.

On December 10th, the Oklahoma Universal Human Rights Alliance will honor human rights heroes from around our great state. A recognition program will take place at the State Capitol. Jimmy Curry and Tim O'Connor will be among those to be recognized. More information about the program can be found here: "Celebrate Human Rights."

"(1)  Everyone has the right to work, to free choice of employment, to just and favourable conditions of work and to protection against unemployment.

"(2)  Everyone, without any discrimination, has the right to equal pay for equal work.

"(3)  Everyone who works has the right to just and favourable remuneration ensuring for himself and his family an existence worthy of human dignity, and supplemented, if necessary, by other means of social protection.

"(4)  Everyone has the right to form and to join trade unions for the protection of his interests."

--Article 23 of the
Universal Declaration of Human Rights