A Network of Mutual Support

"UN Women" is a Recommended
Resource for Oklahoma Women

A year ago at this time, your OKC Chapter of the UN Association was telling the story of how Oklahomans of all kinds benefit from the knowledge resources of the United Nations. We described how UN reports, journals, data sets, etc., are used by libraries, businesses, and public sector professionals at the state and local level. (For example, see our previous blog entries here, here, here, and here).

We're still telling the story. Recently, we came across another example of how UN resources are serving to support the mission of an important office of state government. This latest example comes from the Oklahoma Commission on the Status of Women.

The Commission on the Status of Women has a long history in our state. It was originally established by executive order of Governor Henry Bellmon in 1965. Members of the commission advised the Governor on the problem of gender bias and key quality of life issues facing Oklahoma women and their families. Succeeding governors followed Mr. Bellmon's example.

In 1994, the Oklahoma Legislature formally recognized the value of the Governor's Commission. The Legislature voted to establish the commission in law and to give it additional duties. Since then, the members of the Commission have been appointed by the Governor, the President Pro Tempore of the State Senate, and the Speaker of the State House of Representatives.

Today, pursuant to state law, the Oklahoma Commission on the Status of Women has specific powers and duties. For example, the Commission:

1. Advises state agencies and employees on issues relating to gender bias;
2. Monitors proposed legislation;
3. Acts as a resource and a clearinghouse for research on issues related to women and gender bias;
4. Conducts meetings and seminars to support the goals and duties of the Commission; and
5. Makes an annual report to the Governor and the Legislature.

Every two years, the Commission organizes a Women's Summit. It also coordinates the activities of the Oklahoma Women's Hall of Fame.

Being an advocacy organization for gender equity, the Oklahoma Commission on the Status of Women maintains a list of several dozen online resources. Some of these resources are listed on the Commission's website.

Among the list of resources recommended by the Commission is this one:

"UNIFEM" is the name of the old United Nations agency that for more than 30 years was primarily responsible for promoting women's rights and gender equity. "UNIFEM" is an acronym for the United Nations Development Fund for Women.

In January 2011, UNIFEM was merged into UN Women, which today stands as the UN system's flagship entity for promoting the empowerment of women and the elimination of discrimination against women and girls.

(The website of the Oklahoma Commission on the Status of Women needs to be updated to reflect the new nomenclature that is used by the United Nations. Even so, the link on the Commission's website transfers directly and seamlessly to the UN Women website)

This is direct, documented evidence of a state agency recognizing the value of the United Nations to the people of Oklahoma -- especially people who have a concern for gender equity and women's empowerment.

A year ago, when we were struggling to oppose a number of anti-UN bills in the Oklahoma Legislature, we tried to point out the intricate, inter-related nature of the global society in which we live.

As Dr. Martin Luther King, Jr., once said, "We are tied together in the single garment of destiny, caught in an inescapable network of mutuality. And whatever affects one directly affects all indirectly."

It is impossible to stop the flow of knowledge and ideas, which inevitably find a way to permeate the boundaries of nations.

The best course of action for any entity -- a nation, a state, a city, or an individual -- is to seek knowledge from all sources; to test that knowledge based on experience; and to adopt and apply it where it is appropriate to one's own unique needs and circumstances.

For people around the globe, the United Nations is recognized as a leading source of knowledge and information on a wide range of issues related to gender equity, human rights, and the empowerment of women and girls.

So, from our perspective, it makes perfect sense for the Oklahoma Commission on the Status of Women to recommend UN Women as a resource for Oklahoma citizens. We are, after all, part of the global fabric, inhabiting a world-wide network of mutual support.

As members of the United Nations Association of the USA, we appreciate the good work and valuable contributions of the UN system. Our mission is to promote constructive American leadership in that system. And we are dedicated to educating, inspiring, and mobilizing Americans in support of the goals of the United Nations Charter.

Inductees into the Oklahoma Women's Hall of Fame include two women who had strong connections to the United Nations. One of the very first inductees was Hannah Diggs Atkins, a former State Representative and Secretary of State who also served as the president of our Oklahoma City chapter of the UN Association for a number of years. Additionally, Jeane Kirkpatrick was elected to the Hall of Fame in 1984. Ambassador Kirkpatrick is the namesake of our chapter's advocacy committee -- the Jeane Kirkpatrick Society.


Posted by William Anders at 6:50 AM No comments: 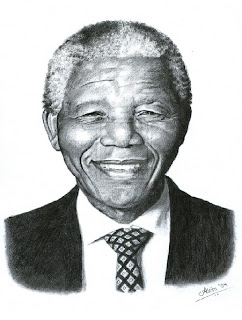 The members of the United Nations Association are saddened by the death of Nelson Mandela.
For 67 years Nelson Mandela devoted his life to the service of humanity — as a human rights lawyer, a prisoner of conscience, an international peacemaker, and the first democratically elected president of a free South Africa.
Twenty years ago, before his election to the presidency of South Africa, Nelson Mandela spoke to the General Assembly of the United Nations.
He commented about the long struggle to end the system of apartheid:
"We have, together, walked a very long road. We have travelled together to reach a common destination.
"The common destination towards which we have been advancing defines the very reason for the existence of this world Organisation.
"The goal we have sought to reach is the consummation of the yearning of all humankind for human dignity and human fulfilment.
"For that reason, we have been outraged and enraged that there could be imposed on any people the criminal system of apartheid.
"Each and every one of us have felt our humanity denied by the mere existence of this system. Each and every one of us have felt brandished as sub-human by the fact that some could treat of others as though they were no more than disposable garbage.
"In the end, there was nobody of conscience who could stand by and do nothing in the search for an end to the apartheid crime against humanity.
"We are here today to convey to you, who are the representatives of the peoples of the world, the profound gratitude of the people of South Africa for your engagement, over the decades, in the common struggle to end the system of apartheid.
"We are deeply moved by the fact that almost from its birth, this Organisation has kept on its agenda the vital question of the liquidation of the system of apartheid and white minority rule in our country.
"Throughout the many years of struggle, we, as South Africans, have been greatly inspired and strengthened as you took action both severally and collectively, to escalate your offensive against apartheid rule, as the white minority regime itself took new steps in its own offensive further to entrench its illegitimate rule and draw tribute from those it had enslaved.
"In particular, we are most grateful for the measures that the United Nations, the OAU, the Commonwealth, the Non-Aligned Movement, the European Community and other intergovernmental organisations took to isolate apartheid South Africa.
"We are deeply appreciative of similar initiatives that individual countries, non-governmental organisations, local communities and even single individuals took, as part of their contribution to the common effort to deny the apartheid system all international sustenance.
"This global struggle, perhaps without precedent in the inestimable number of people it united around one common issue, has helped decisively to bring us to where we are today...."
In November 2009, the UN General Assembly declared that July 18th should be celebrated around the world as "Nelson Mandela International Day" in recognition of the former South African President’s contribution to the culture of peace and freedom. It is the only international day recognized by the United Nations that is named for an individual person.
In establishing Nelson Mandela Day, the General Assembly was intentional in recognizing Nelson Mandela’s values and his dedication to the service of humanity in the fields of conflict resolution, race relations, the promotion and protection of human rights, reconciliation, gender equality and the rights of children and the poor.
The members of the Oklahoma City chapter of the United Nations Association mourn the passing of a great leader in the promotion of peace throughout the world.
In so many ways, the completed life of Nelson Mandela is an example of the highest values of the United Nations.
# # #
For more information on the UN's efforts to overcome apartheid, please see this webpage:
"The United Nations: Partner in the Struggle against Apartheid"
www.un.org/en/events/mandeladay/apartheid.shtml
For a copy of the General Assembly resolution designating July 18th as Nelson Mandela International Day, please see here:
www.un.org/ga/search/view_doc.asp?symbol=A/RES/64/13
Posted by William Anders at 2:10 PM 1 comment: