A True Kickapooo Warrior and Gentleman 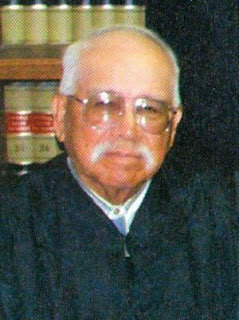 Mr. Wahpepah is being honored posthumously. He died in 2014.

Lawrence Wahpepah was born in McLoud, OK, in 1924. He graduated from Dale High School and enlisted in the United States Navy, serving during World War II.

After the war, Mr. Wahpepah returned to his hometown. He found employment at Tinker Air Force Base, and he served his community in many ways. For example, he served as the mayor of McLoud. He sat as a tribal judge for the Potawatomi and Sauk and Fox tribes. He volunteered as a Little League coach, and he enjoyed singing at many pow-wows.

Lawrence married Francena Wahweahon in 1949. He and Cena had three daughters: Betty, Leslie, and Carol.

Lawrence Wahpepah had a deep sense of public service.  He was a huge supporter of Human Rights for Native Americans as well as his entire country.  This was illustrated by his two terms as McLoud's mayor.  He also was on the McLoud City council and he was a long time tribal judge, defending the rights of his fellow Native Americans.

In the U.S. Navy, Mr. Wahpepah saw action in the Aleutians Islands.  The Alaskan government, to commemorate the 60th anniversary of the end of World War II, issued a citation that states, "the State of Alaska salutes Lawrence Wahpepah, a veteran of the heroic effort that defeated and expelled invading Imperial Japanese forces from Alaska."

Lawrence and Francena's three daughters graduated from McLoud High School and excelled in Academics.  When asked the secret of their children's success, Francena said softly, "We taught them to always do their best and to be self-reliant and to treat others well."  This philosophy was duplicated in their support of a Bureau of Indian Affairs three-year grant for the Kickapoo Native American Home Start Project for children with special needs.

Mr. Wahpepah was 90 years old when he died.

At the time of his death, it was written:

“Lawrence was a true Kickapoo warrior and gentleman who was a role model for not only his family, but for his community as well. No matter where he traveled, he never met a stranger.”

On December 10th, the Oklahoma Universal Human Rights Alliance will honor human rights heroes from around our great state. A recognition program will take place at the State Capitol. Lawrence Wahpepah will be among those to be recognized. More information about the program can be found here: "Celebrate Human Rights."

(1) Men and women of full age, without any limitation due to race, nationality or religion, have the right to marry and to found a family. They are entitled to equal rights as to marriage, during marriage and at its dissolution.

(2) Marriage shall be entered into only with the free and full consent of the intending spouses.

(3) The family is the natural and fundamental group unit of society and is entitled to protection by society and the State.

Posted by William Anders at 3:44 AM