The Common Heritage of Humanity 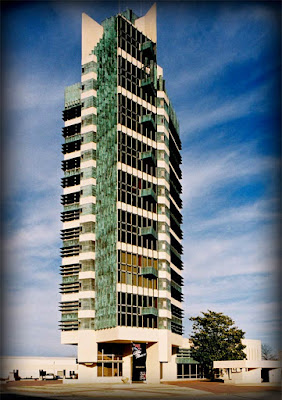 
The Price Tower, a national historic landmark designed by famed architect Frank Lloyd Wright, has been nominated for inclusion on the UNESCO list of World Heritage Sites.

The 19-story tower, located in Bartlesville, was completed in 1956. For many years, it served as the corporate headquarters for the H. C. Price Company, an Oklahoma oil pipeline and chemical firm.

A decision on a World Heritage designation for the Price Tower may happen soon. The 39th session of UNESCO's World Heritage Committee will take place from June 28th to July 8th in Bonn, Germany.

As reported by NewsOn6.com, "Bartlesville's Price Tower is one of ten buildings in seven states designed by architect Frank Lloyd Wright nominated for inclusion on the World Heritage List."

U.S. Secretary of the Interior Sally Jewell made the announcement in January.

Listed places may include forests, mountains, lakes, islands, deserts, monuments, buildings, complexes, or entire cities. Presently, as of May 2015, there are over 1,000 sites on the UNESCO list in more than 160 nations. According to Wikipedia, Italy is home to the greatest number of World Heritage Sites with 50 sites, followed by China (47), Spain (44), France (39), Germany (39), Mexico (32) and India (32).

Each World Heritage Site remains part of the legal territory of the nation where it is located.

The World Heritage program began in 1972 with the adoption of the Convention Concerning the Protection of the World's Cultural and Natural Heritage -- an international agreement which has been ratified by the United States and 190 other state parties. The program serves to list, name, and conserve sites of outstanding cultural or natural importance to the common heritage of humanity.

Preservation of the world's cultural heritage has been a topic in the news recently, as World Heritage Sites in Syria, Iraq, Libya and Mali have suffered from attacks and destruction.

As an example, Iraq's Ministry of Tourism and Antiquities reported earlier this year that an ISIS / ISIL militant group attacked the ancient archaeological site of Nimrud in northern Iraq and damaged it with heavy vehicles.

George C. Papagiannis, External Relations & Information Officer for UNESCO, said the loss of artifacts from Nimrud was devastating for its brutality.

“These extremists are trying to destroy the entire cultural heritage of the region in an attempt to wipe the slate clean and rewrite history in their own brutal image,” he told the New York Times. He added that Nimrud was recently nominated to UNESCO’s list of world heritage sites.

In response, the UN Security Council has called for the protection of cultural heritage and diversity. The International Criminal Court has defined the intentional destruction of historical buildings as a war crime. Additionally, UNESCO has developed a comprehensive set of international instruments to protect cultural heritage. Each of these actions is designed to authorize national governments to act forcefully to deter vandalism and deliberate attacks against sites of outstanding cultural significance to the human family.

"The Tree that Escaped the Crowded Forest." The Price Tower was designed to be a multi-use building with business offices, shops, and apartments.

The distinctive features of the building led its architect to compare the tower to a tree:

In the words of Frank Lloyd Wright, the Price Tower was "the tree that escaped the crowded forest." It was based on the design of a building that was originally intended to be built in the urban environment of New York City.

The Classen building in Oklahoma City's Asian District was designed in the style of the Price Tower, as a tribute to Frank Lloyd Wright.


Contact your federal officials to appeal for a waiver of the law regarding U.S. payment of UNESCO dues.

UNESCO is working on a smaller budget than it used to, because the U.S. withdrew its dues -– a significant portion of UNESCO’s budget -– several years ago as a result of a law about recognition of Palestine.

The U.S. lost its voting rights at UNESCO in 2013, a huge embarrassment for American leadership in the world community.

To support American leadership in the United Nations, please consider joining the United Nations Association of the USA (UNA-USA). It's easy to join online ...
... and students 25 years old or younger can join UNA-USA for FREE at genun.unausa.org!


Posted by William Anders at 9:45 AM No comments: