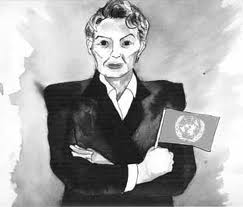 In 2012, our chapter of the UN Association was recognized for our efforts to advocate for American leadership in the United Nations. We scored a great success when the Oklahoma Legislature failed to pass an anti-UN resolution that was introduced by State Rep. Charles Key.

In 2013, we are expecting more challenges and opportunities.

For example, we'll have a chance to advocate for ratification of several human rights treaties that are languishing in the U.S. Senate. The Senate's recent failure to pass the Convention on the Rights of Persons with Disabilities was widely criticized (with good reason). There is a possibility that the treaty will be brought up for reconsideration in the 2013 session of Congress. We will call upon Senator Coburn and Senator Inhofe to faithfully represent the good sense viewpoint of Oklahomans -- rather than the narrow philosophy which has animated their votes so far.

Meanwhile, at the State Capitol, State Rep. Sally Kern has threatened to introduce a bill aimed at squashing state and local government efforts to pursue sustainable development activities -- such as those described in the UN's "Agenda 21" initiative. Her bill would have dire consequences for state agencies struggling to respond to drought, disease, and other environmental stresses. We will lead an advocacy campaign aimed at educating our state legislators about the good work of the United Nations and the many ways it contributes to our health and well-being right here in Oklahoma.

If you aren't familiar with Agenda 21, we urge you to read this "Short History of the UN's Efforts to Protect our Future" ... HERE.

We're building an active advocacy team -- a capable group of volunteers who are prepared to contact our elected representatives with phone calls, letters, emails, etc. We have dubbed our advocacy team the "Jeane Kirkpatrick Society" (named after the first woman to serve as our country's Ambassador to the United Nations).

To read a short biography about the life of Ambassador Jeane Kirkpatrick, see our UNA-OKC website ... HERE.

Are you interested in serving in our Jeane Kirkpatrick Society? It doesn't cost anything to join. You can sign up here ...

Members and friends of the United Nations Association are welcome to become a part of the Jeane Kirkpatrick Society.