In Her Own Words, Part 1 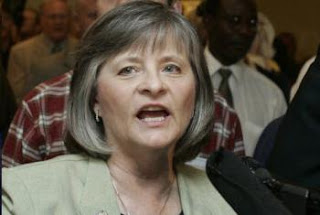 Rep. Kern suggests that her Anti-UN proposal
is about prohibiting cities and towns from
enacting building codes, zoning rules, and
laws regarding property maintenance

Also, she is opposed to EPA regulations,
the Clean Air Act, the Endangered Species Act,
and other "radical environmental control."

We have been critical of House Bill 1412 because it is a flawed proposal -- based on a faulty premise, with vague provisions, and certain to create more problems than it solves. At the same time, we have tried to avoid any direct personal criticisms of Rep. Sally Kern.

In fact, we have tried to go out of our way to accurately represent her comments and arguments about HB 1412. We're interested in her opinions, and we take them seriously.

For that reason, we want to present a partial transcript of the floor debate that happened on March 13th when HB 1412 received a vote from the Oklahoma House of Representatives.

Rep. Kern's remarks are taken from a video of the floor debate that appears on the OKHouse.gov website.

"The Intrusion of our Government"

The discussion of HB 1412 began with a series of questions that were posed about the purpose, intent, and potential consequences of the proposed legislation. Rep. Kern was questioned extensively.

The first question came from Rep. Mike Shelton of Oklahoma City. In reply to a question from him about the purpose of HB 1412, Rep. Kern explained:

"This bill is specifically dealing with the intrusion of our government into personal property rights that have been happening for the last 20 years and getting worse through the Agenda 21 of the UN, their Sustainable Development program that has been implemented into our own government in 1993 when President Clinton established the President Council's on Sustainable Development and then President Obama in his President's Rural Council in 2011."

Rep. Emily Virgin asked Rep. Kern if she could provide an example of "some infringements on private property rights directly related to Agenda 21?"

Rep. Kern replied: "The International Property Maintenance Code is being used right now in some of the cities in our state that requires rental property owners to give a key to their property to the police so that the police can come in at will to check for illegal activity."

"There have been numerous accounts of farmers and ranchers who are having individuals from the government show up on their property asking to take pictures, asking to do counts of their farm animals, their livestock, different things like that."

Rep. Virgin: "What's your proof that those events are directly related to Agenda 21?"

Rep. Kern: "It's very easy to see the organization that is coming in and asking for these different privileges, if you will, and to trace them back to United Nations and the Agenda 21 program. And then, in '93, when President Clinton established the Council on Sustainable Development, he implemented the program through 10 different agencies and they're tied back, you can follow them, trace them through those different agencies."

Rep. Kay Floyd argued against House Bill 1412 when it was first presented in the States' Rights Committee. She focused on the particular language of the bill that prohibits cities and towns from entering into agreements with any "nongovernmental or international organizations" linked to Agenda 21.

Rep. Floyd: "Is there a list or some type of way for us to enforce these prohibitions...?"

"Who is accredited by the United Nations....? Who's on the list?"

Rep. Kern replied: "You can go on the UN website, and you can find all the NGO's there."

"Plus, when a city is approached by a certain organization wanting to help them with different policies and things, it's very easy to just look on the internet and find out who that organization -- who they're representing, where they're coming from.

"So, any city attorney that cares to keep their city out of trouble, I suppose you could say, or to abide by this if it were to become law, can find out very easily."

Rep. Kern: "No... Only those that are seeking to establish and enforce guidelines that will impact and deal with the governing of the citizens of the city or that state."

Rep. Jerry McPeak: "What proof do you have of this infiltration and contamination in 1993?"

Rep. Kern: "Well, you can go and look up the President's Council on Sustainable Development, and there are 10 different agencies that are listed -- uh, the Environmental Protection Agency is one of them. I should have brought that list. I don't have it with me. But, there is definite proof. If you want to know it, it's there."

Rep. Ed Cannaday: "Is this in any way a treaty that is enforceable by law?"

This report concludes here ... "In Her Own Words, Part 2"